Penis Size Matters for Sex, but Girth is Often Preferred Over Length

It’s a huge mistake for a man with a small penis to think all women have a chilling Sex-in-the-City-type large penis obsession. The reality is that men with large penises are often a woman’s worst nightmare. And by many reports, men who have it going on downstairs tend to think all they need to do is show up. Meanwhile, men with size challenges who focus on making sex all it can be manage to even the playing field. There are pros and cons to penises of all sizes, and girth is often better than length. Men can opt for penis enlargement, and many men today choose to increase girth as opposed to length.

Cons of a Lengthy Penis 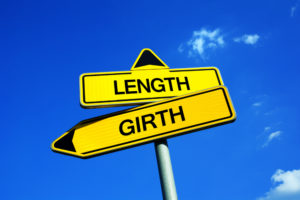 The pros of a lengthy penis are fairly obvious. More inches can provide deeper penetration, and sex involves longer thrusts of pleasure. But these attributes have their downsides. The following are a few of the reasons a long penis is not necessarily ideal:

Pros of a Smaller Penis

A man who is modestly endowed plus determined to be great at sex will focus on technique, angle, positioning, and other ways to maximize their low-level natural assets. As a result, men with small penises can be the best in bed. They may engage in more stimulating conversation and give foreplay the kind of attention women dream of, which may include more clitoral stimulation, dirty talk, and/or kissing. More pros of a smaller-than-average penis: Yes, there are cons of a small penis, including varying degrees of awkwardness during sex. Achieving a good rhythm while keeping the penis inside the vagina can be tough, etc. When it all comes down to it, though, it’s the size of the orgasm that counts. Many women find that a penis with girth does the best job of stimulating the clitoris to orgasmic heights.

How Girth Rates with Women

As previously mentioned, not all women are penis-obsessed. Although far less research has been done to measure women’s thoughts as regards to girth of penises, what is known is fairly conclusive. Women prefer a penis with greater thickness than length if they had a choice. According to science, this is because the nerve endings surrounding the vagina entrance are more numerous than those inside the vaginal canal. And keep this in mind: The average vagina is less deep than the average penis is long. In other words, most men are long enough. This may explain why girth gains are becoming more popular among men who get penis enlargement treatments.

Dr. Victor Loria is a renowned surgeon who has developed an exclusive PLATINUM technique, a male enhancement procedure that adds girth. The non-invasive, nonsurgical procedure has been performed more than 5,000 times. Patients typically return home the same day, and the treatment works. Call Loria Medical today at 877-DR-LORIA (877-375-6742), if you are interested in increasing penis size where it counts most during sex.