Is ‘Summer Penis’ A Real Thing?

Lots of men say their genitals get larger and their erections are better during warmer months. Ah Summer Penis. Not to be mistaken with Summer penile syndrome, (largely a Pediatric condition) characterized by redness, swelling and itching due to chigger bites. No, this is a phenomenon of different sorts.  Last Summer after news of Pete Davidson of SNL and his reportedly formidable manhood made headlines in social media the whole internet was chatting about his BDE, or Big Dick Energy. Apparently that wasn’t the last of it and soon after ‘Summer Penis’ took over the spotlight and has immediately established itself as a real thing indeed. 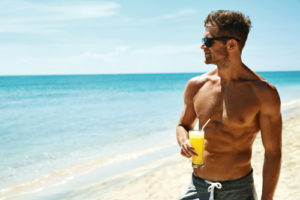 What is Summer penis? Well, Summer Penis is a notable marvel that happens during the warmer months of May through August. I’m curious since we’re in Florida does that mean men get an extra added boost of this S.P. delight all year round? It does seem to only answer to the sway of the seasons so I really can’t be certain. All I know is, according to Tracy Moore who brought it to light in a MEL Magazine article is that “Summer Penis is a temporary penis fluctuation that thanks to heat and warmth, gives men a months-long leg-up on shaft and girth size.” According to numerous men who piped up to agree that in the hot months their penises can swell to twice that of regular size. Summer penis believers swear that they experience ‘better erections’ during these summer months regardless of climate. Another Redditor wrote that having Summer Penis made his balls hang “down as if they were trying to get to my knees” whereas in the cold, dark winter “they look like hard little brains”. Guys are obsessed with Summer Penis More guys have taken to Reddit, Facebook and other social media platforms to search ‘bigger dick in summer’ and have found more guys with similar theories about it. One guy named Guillermo wrote: Anybody notices size fluctuation during the year? I know mine is bigger. I have better erections in the summer. In the winter it’s the exact contrary. Why is that? More heat = better bloodflow? Does that happen to you guys also? According to Landon W. Trost, MD, a urologist with the Mayo Clinic in Rochester, Minnesota. Is there any medical or scientific reason to expect that erections may swell in summer heat? According to Trost, “From an ‘is it possible’ standpoint, I think there are certain things you could say may make it more likely for people to have more of an erection — or maybe less of a contracted penis — in the summer months.” Another Urologist Dr. Jamin Brahmbhatt told reporter Tracy Moore that “When it’s hot outside, you may take in more water, which may in combination with the sweating make it appear like your body or skin is bloated.” So, just like blood vessels contract when confronted with the cold, they expand when warm to regulate heat. The warmer the ambient environment, the more the blood vessels dilate, and the warmth allowing vasodilation increases blood flow. There is some science to back up summer penis after all. This season coming forward I’m sure we will be seeing some amped up bods in more way than one. Perhaps some more fashionable speedos will be designed to highlight these jacked up packages and offer up some appealing eye candy. Just make sure to stay away from those icy cold pools guys. For ‘Summer penis’ effects all year long contact us for your very own private consultation with Dr. Loria today.